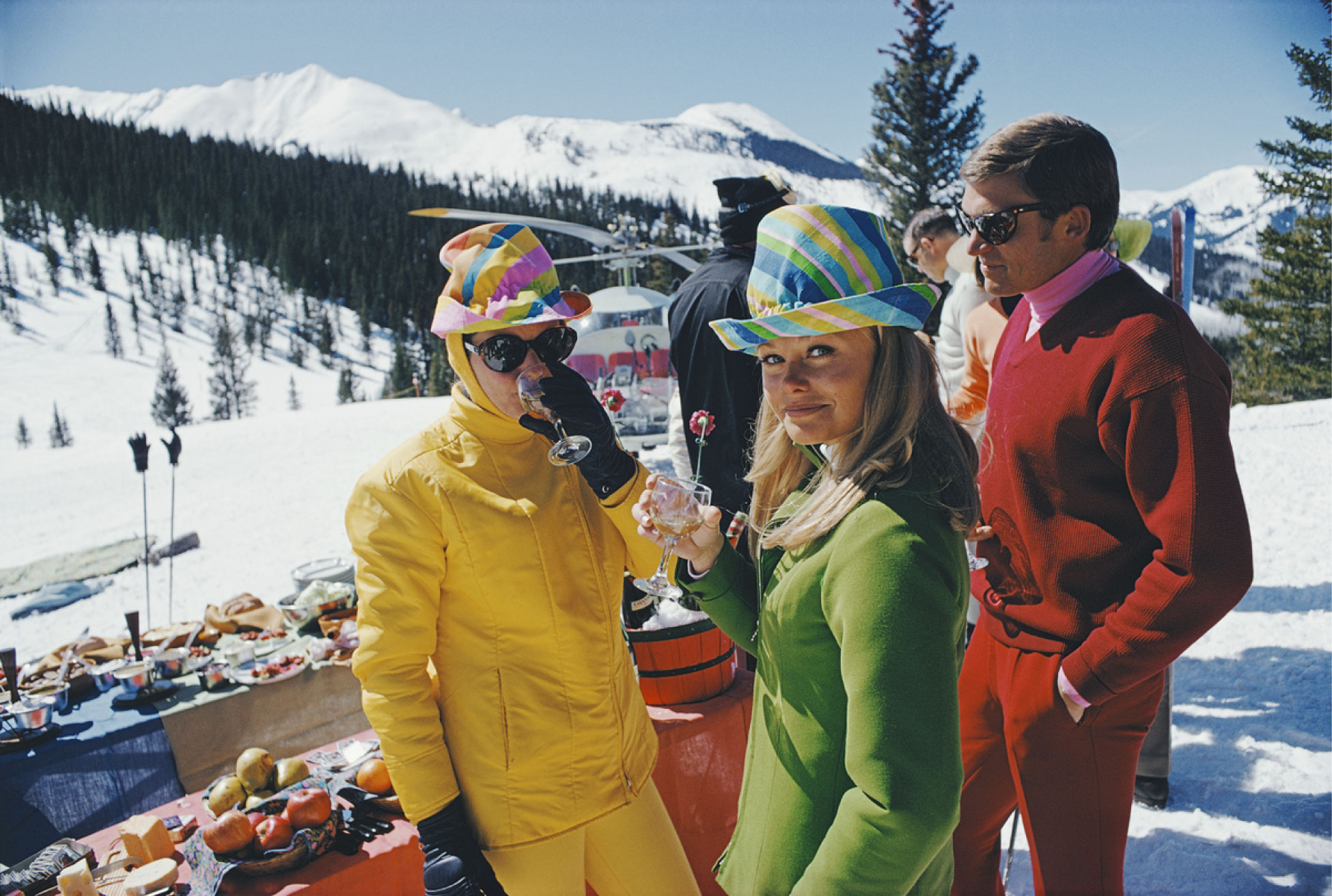 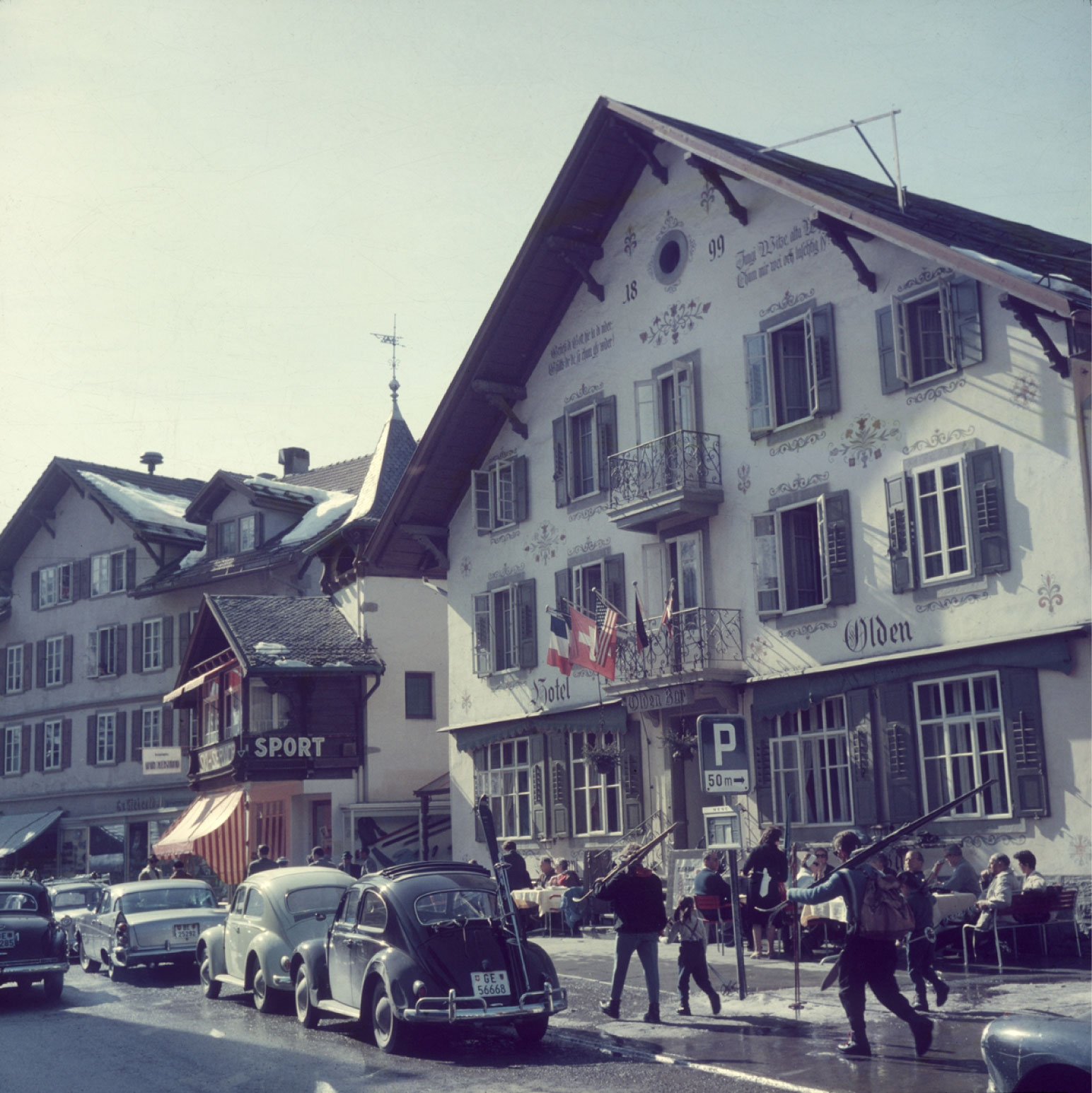 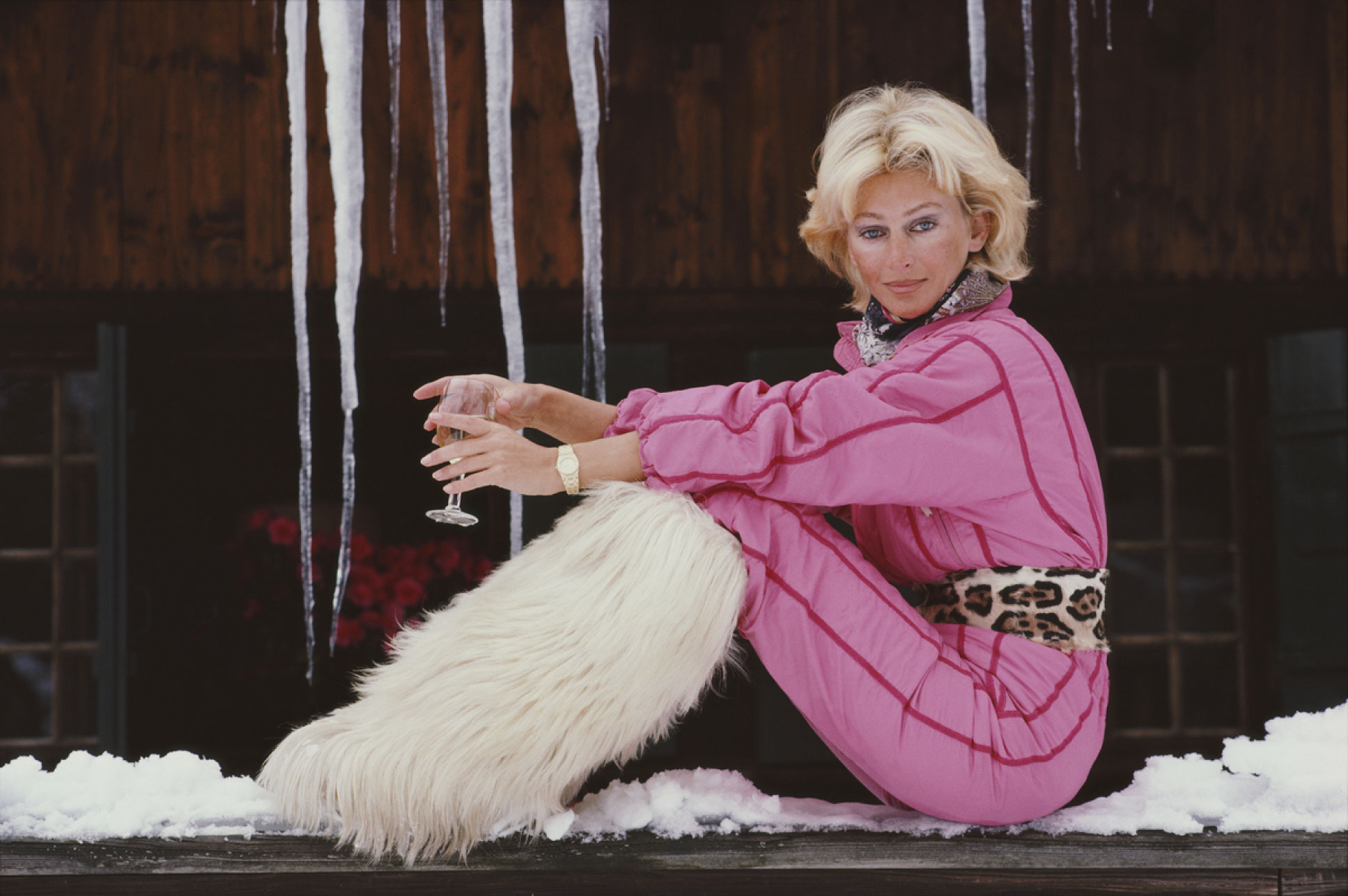 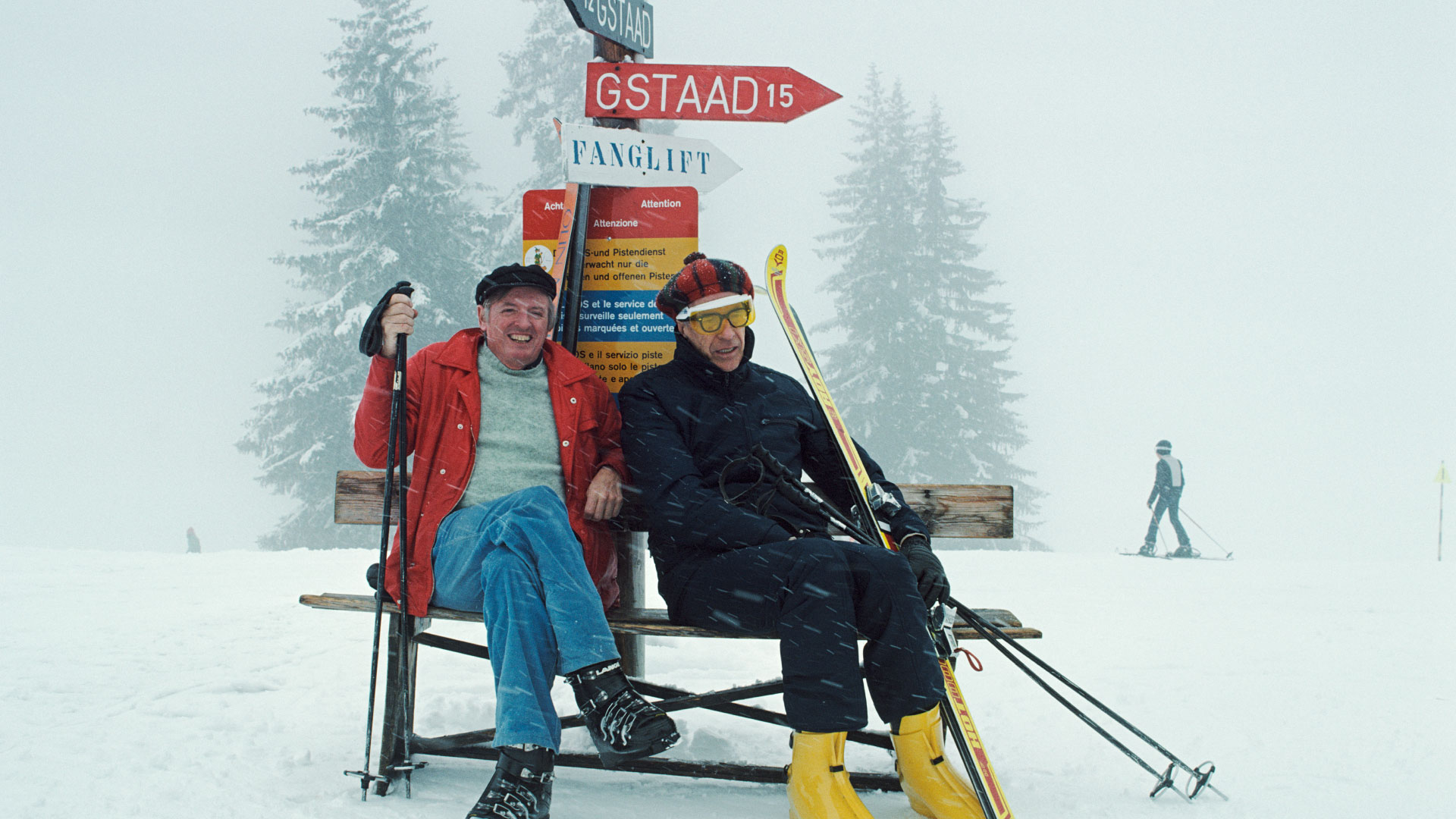 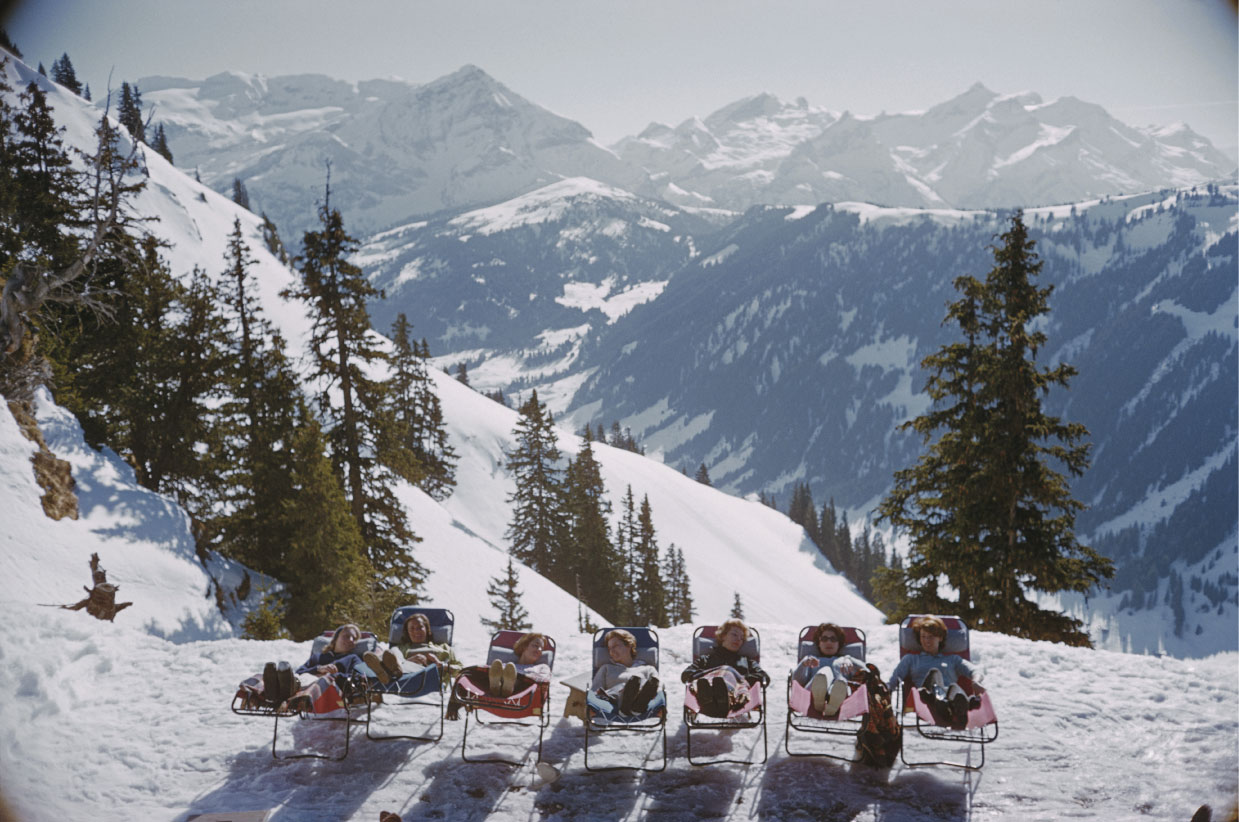 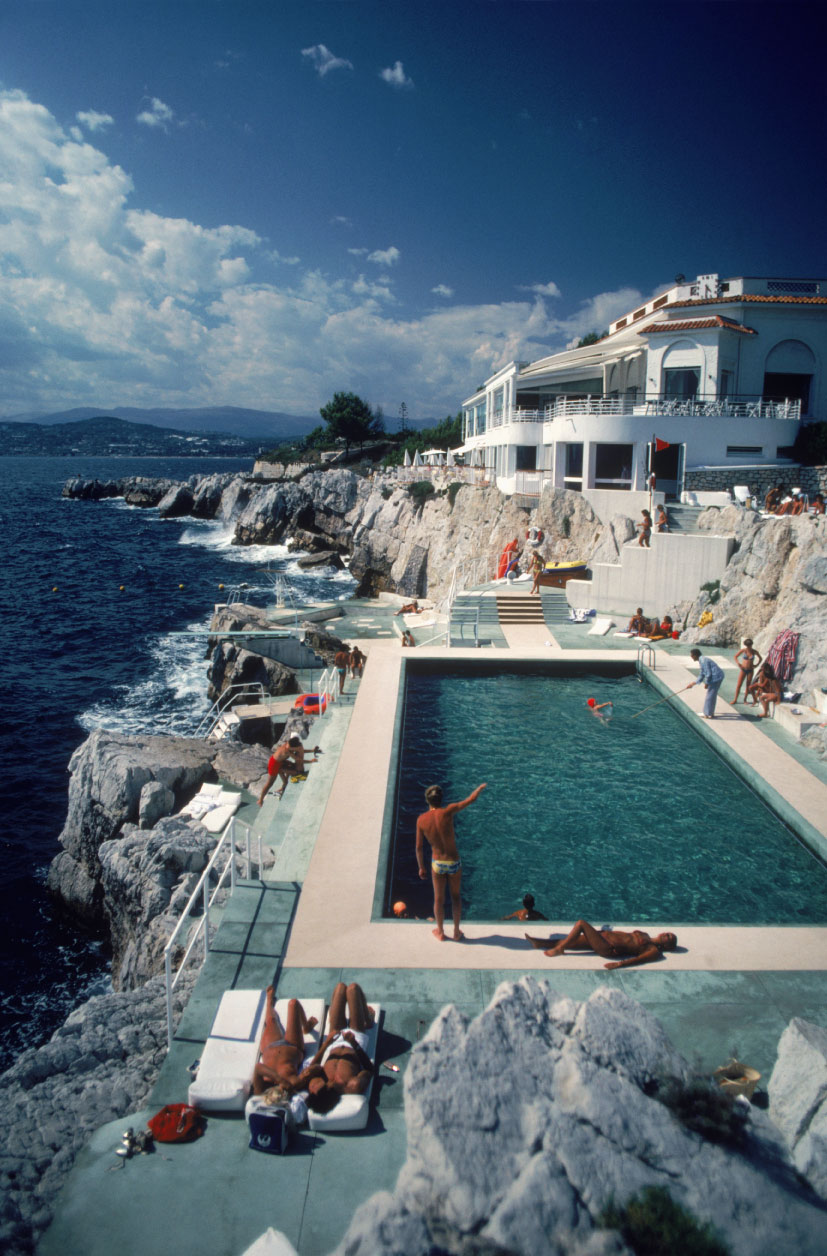 And among those settings? A plethora of photos set amongst the planet’s most fabulous winter backdrops. Though lesser known perhaps than some of Aarons’ most enduring photos — like Poolside Glamour of two socialites chatting in Palm Springs, or Kings of Hollywood of Clark Gable laughing with friends in black tie in Beverly Hills — the snow-speckled photos continue to cast an allure unto themselves. Mary Aarons, the keeper of her father’s legacy, generally favors “the landscapes,” as she calls them.

In that respect, her father covered the gamut, his many “ski-lift” tableaux from Gstaad to Aspen acting as a foil to the “beautiful boats… the beach umbrellas” that he also tirelessly chronicled in the Côte d’Azur.

Slim Aarons’ mountain photographs, in particular, offer nothing but charm and nostalgia and, yes, crispness. The pants were tight, the poles were straight, and the sweaters were bright. In Aarons’ world of après-ski, the champagne flows ever freely and the frisson of fun is never far.

Among the most famous of these pictures is one he took of William F. Buckley, a godfather of conservatism, getting jolly with John Kenneth Galbraith, a celebrated economist who held a similar command in liberal circles. The photo reveals them laughing in Gstaad. If nothing else, the image shows that skiing was to bring these two disparate men together.

Other winter wanderlust shots include one from 1963 titled Winter Suntans (in which a group of women are shown blithely reclining on the Gstaad snow, rugs covering their knees). Possibly the most amusing of Slim Aarons’ photos, is Skiing Waiters: Three servers ski through the trees, each shown carrying, in turn, a bird on a tray, a menu, and a bottle of wine chilling in a bucket!

That the intrepid photographer was drawn to the snow is no mere accident. He came by it quite naturally, growing up as a simple New Hampshire boy. Cross-country skiing was his forté, and he later became an associate of the International Skiing History Association, as was noted in some quarters when he died in 2006 at age 89. Post World War II, when skiing became the hot new sport and the Social Register was a thing, Aarons was on the scene, Leica Camera swinging from his neck.

Dispatched as a combat photographer in his 20s, George Allen (Slim) Aarons saw both battlefields and sieges, and was himself wounded during the Battle of Anzio as the Germans blew up a dock along the Italian beach. Aarons lost a twin brother in the war; and was granted a Purple Heart. He saw himself as a “photojournalist” and a “storyteller.”

After the war, Aarons worked as a stringer in New York and Los Angeles, and later on as a regular correspondent for LIFE, going on to photograph every celebrity: C. Z. Guest standing erect and ice-cool as the hostess of Palm Beach. Babe Paley at her cottage in Jamaica’s Round Hill. The Duchess and Duke of Windsor dancing in the winter of their lives. Such a zelig figure was Slim Aarons that during Britain’s Ascot races, when Aarons was accidentally knocked down by guards, he was rescued by none other than Prince Philip. “Slim,” the prince said, “what the hell are you they doing to you?”.