Giulio Paolini (born 5 November 1940) is an Italian artist associated with both Arte Povera and Conceptual Art.

Paolini was born in Genoa. After a childhood spent in Bergamo, he moved with his family to Turin where he still lives today. He attended the Giambattista Bodoni State Industrial Technical School of Graphics and Photography, graduating in the Graphics department in 1959. He had been interested in art from an early age, visiting museums and galleries and reading art periodicals. Towards the end of the 1950s he approached painting, trying some pictures of an abstract nature, close to monochrome. The discovery of modern graphics during his studies and the fact that there were architecture magazines around the house – his elder brother Cesare (1937–1983) was an architect and designer of the Sacco chair – contributed to orienting him towards a line of research aimed at zeroing the image.

He did his first work in 1960, Disegno geometrico (Geometrical Drawing), which consists of the squaring in ink of a canvas painted with white tempera. This preliminary gesture of any representation whatever would remain the point of “eternal recurrence” in the universe of Paolini’s thought: topical moment and original instant that revealed the artist to himself, representing the conceptual foundation of all his future work.

In the early 1960s, Paolini developed his research by focusing on the very components of the picture: on the painter’s tools and on the space of representation. For his first solo show – in 1964 at Gian Tommaso Liverani’s La Salita gallery in Rome – he presented some rough wooden panels leant against or hanging on the wall, suggesting an exhibition in the process of being set up. The show was seen by Carla Lonzi and Marisa Volpi who would shortly afterwards write the first critical texts on the young artist. In 1965 Paolini began to use photography, which allowed him to extend his inquiry to the relationship between artist and work (Delfo, 1965; 1421965, 1965). In the same year, through Carla Lonzi, he met Luciano Pistoi, owner of the Galleria Notizie in Turin, who introduced him to a new circle of friends and collectors and became his main dealer until the beginning of the 1970s.

Between 1967 and 1972, the critic Germano Celant invited him to take part in Arte Povera exhibitions which resulted in his name being associated with that movement. In fact Paolini’s position was clearly distinct from the vitalistic climate and “existential phenomenology” that distinguished the propositions of Celant’s artists. He repeatedly declared an intimate belonging to the history of art, identifying programmatically with the lineage of all the artists who had preceded him. Some of his best known works can be traced back to this purpose, extraneous to the militant scene of the late 1960s: Giovane che guarda Lorenzo Lotto (Young Man Looking at Lorenzo Lotto, 1967), the “self-portraits” from Poussin and Rousseau (1968) and the pictures in which he reproduces details of old masters’ paintings (L’ultimo quadro di Diego Velázquez, 1968; Lo studio, 1968). Among Paolini’s main references in those years were Jorge Luis Borges, to whom he paid homage on several occasions, and Giorgio de Chirico from whom he borrowed the constituent phrase of the work Et.quid.amabo.nisi.quod.ænigma est (1969).

His first official acknowledgements came with the 1970s: from shows abroad, which placed him on the international avant-garde gallery circuit, to his first museum exhibitions. In 1970 he took part in the Venice Biennale with Elegia (Elegy, 1969), the first work in which he used the plaster cast of a classic subject: the eye of Michelangelo’s David with a fragment of mirror applied to the pupil. One of the outstanding themes in this decade was a backward glance at his own work: from literal citation of celebrated paintings he arrived at self-citation, proposing a historicizing in perspective of his oeuvre. Works such as La visione è simmetrica? (Is Vision Symmetrical?, 1972) or Teoria delle apparenze (Theory of Appearances, 1972) allude to the idea of the picture as potential container of all past and future works. Another theme investigated with particular interest in this period was that of the double and the copy, which found expression above all in the group of works entitled Mimesi (Mimesis, 1975–76) consisting of two plaster casts of the same classical statue set face to face, calling into question the concept of reproduction and representation itself.

The period most dense in exhibitions and retrospectives, with the publication of important monographs, was the 1980s. In the first half of the decade an explicitly theatrical dimension began to establish itself with works marked by fragmentation and dispersion (La caduta di Icaro, 1982; Melanconia ermetica, 1983) or distinguished by theatrical figures such as eighteenth century valets de chambre (Trionfo della rappresentazione, 1984). Paolini’s poetics was considerably enriched by literary attributions and mythological references, as well as by the introduction of cosmic images. In the late 1980s the artist’s reflections turned mainly on the very act of exhibiting. Starting with his solo show at the Musée des Beaux-Arts in Nantes (1987) the concept of the exhibition – its premises and its promises – became progressively configured as the actual subject of the works themselves.

In the course of the 1990s, further inquiry into the idea of exhibiting spread into other, new modalities. The increasingly complex set-ups often followed a typology that was additive (seriality, juxtaposition) or centrifugal (dispersion or dissemination from a central nucleus) or centripetal (concentration and implosive superimposition). The place of the exhibition became the stage par excellence of the “theatre of the opus”, meaning of the work in its doing and undoing: the place that defined the very eventuality of its happening (Esposizione universale, 1992; Teatro dell’opera, 1993; Essere o non-essere, 1995). Completion of the work was moreover constantly deferred, leaving the spectator in perennial expectation: just what the artist always feels from the start at his worktable, waiting for the work to manifest itself.

In the 2000s, another theme especially dear to Paolini took on special importance, as much in his artwork as in his writings: the identity of the author, his condition as spectator, his lack of contact with a work that always precedes and supersedes him.

Paolini’s poetics and artistic practice as a whole may be characterised as a self-reflective meditation on the dimension of art, on its timeless “classicality” and its perspective without vanishing point. By means of photography, collage, plaster casts and drawing his intention is always to inquire, with great conceptual rigour, into the tautological and at the same time metaphysical nature of artistic practice. 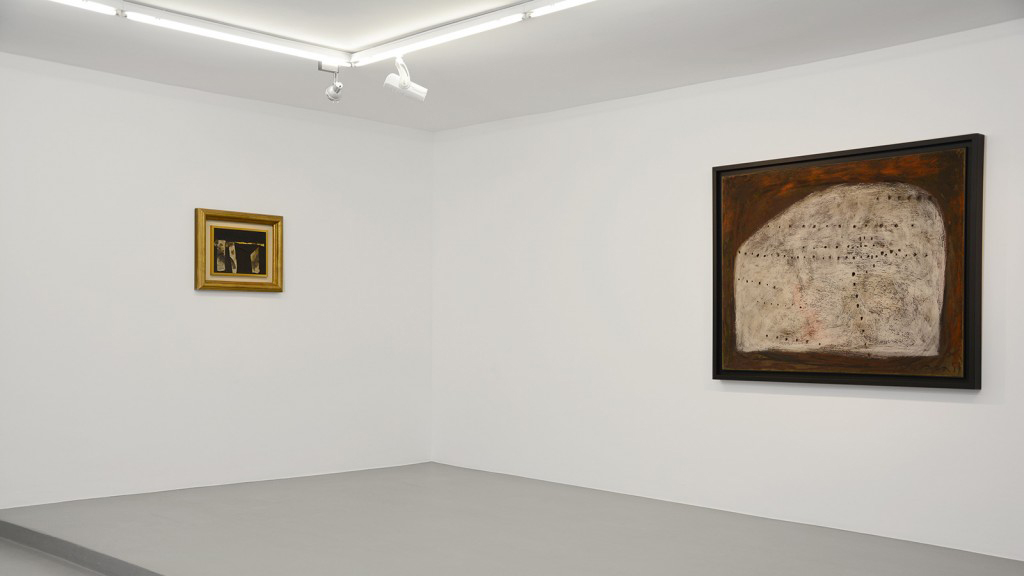