Maurizio Cattelan is a contemporary Conceptual artist who began his career as a furniture-maker in Forlì, Italy. The “court jester of the art world” was born in Padua, Italy, on September 21, 1960. With no formal art training, he “considers himself an ‘art worker’ rather than an artist.” Known for his macabre humour and interrogation of social mores, he derives inspiration from the Dadaist and Surrealist movements. His absurdist sculptures and installations often depict celebrities, art historical figures, or taxidermied animals set in surreal scenes. His oeuvre engages controversial subjects such as suicide, anxiety, religiosity, and the decadence of American culture.

Cattelan was recently thrust into the political spotlight when President Donald Trump requested a Vincent van Gogh landscape from The Guggenheim Museum and their chief curator, Nancy Spector countered instead with his 18-karat solid gold toilet installation entitled America.

Pierpaolo Ferrari is an Italian photographer, born and raised in Milan, Italy. Working for agencies like BBDO and Saatchi & Saatchi, he has made a name for himself shooting for international clients like Nike, Sony, Heineken, MTV, Mercedes Benz, Audi, and BMW.

His art is instantly recognized by its colourful surrealism, which he accredits to the style to his early mentors. Requiring almost complete creative freedom when working for a client, he notes, “If you call me, and you have a picture in mind and you want me to do that picture—you need to call someone else. Someone who is good at interpreting your ideas. We want to know the feeling that you’re going for, but after that we go our own way.” His work has been featured in advertisements for Kenzo and Alitalia, and in publications including The New York Times, Bloomberg Pursuits and Wallpaper*. 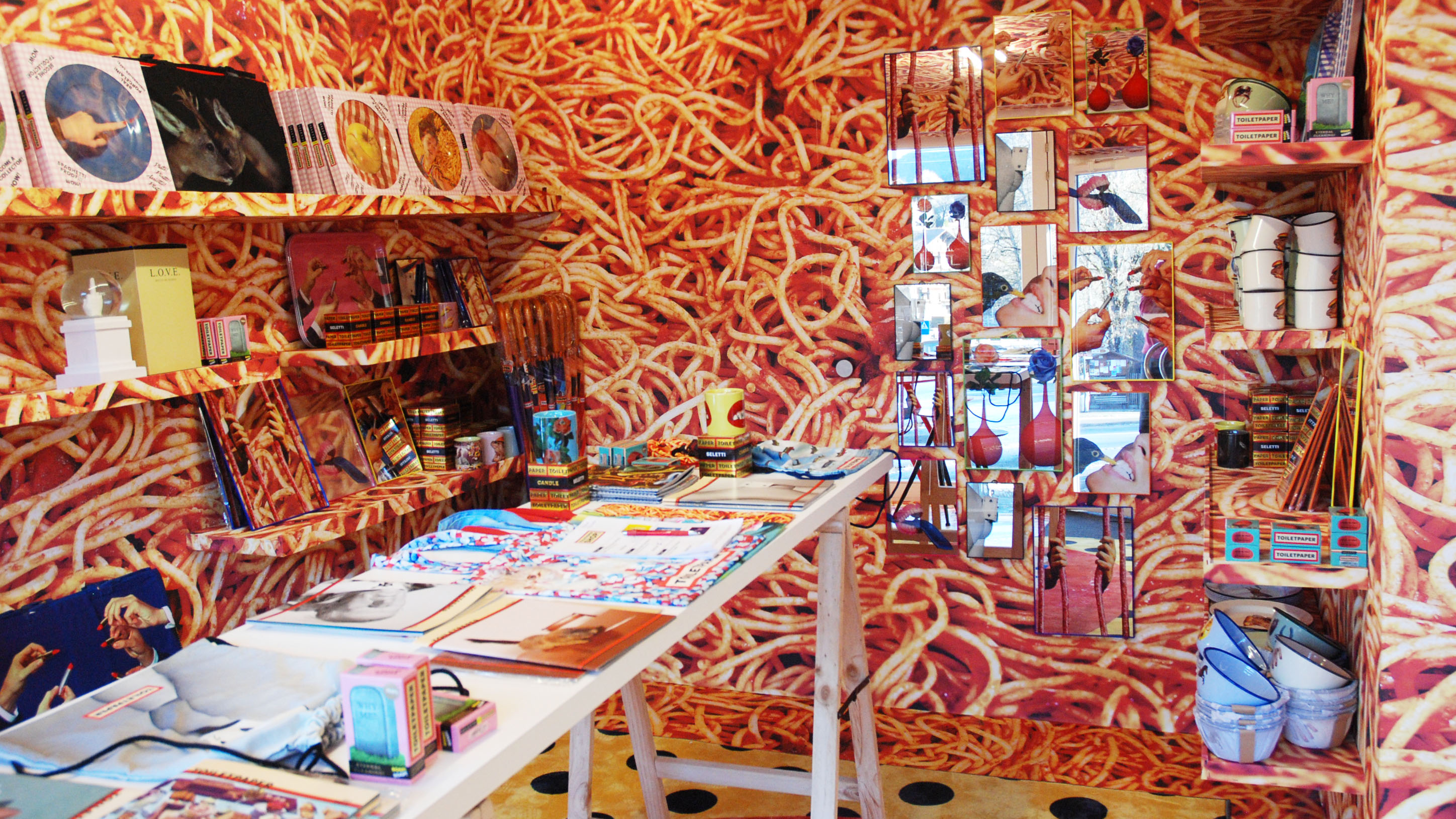 In 2012, the duo unveiled a giant billboard at West 18th Street and 10th Avenue, near the High Line in Chelsea. Red-lacquered, free-floating, festooned fingers pop out of a blue velvet backdrop in an ironic comment on the deceptive allure of luxury. Cattelan called the image “Surreal but verging on Pop”, adding that it was gory without the blood. The fourth installment in a series of art installations sponsored by Edison Properties, Toiletpaper’s billboard followed works by John Baldessari, Anne Collier, and David Shrigley.

Toiletpaper took over the seven front windows of the Palais de Tokyo in Paris in June 2013. Rather than exhibiting works in the gallery space, the monumental windows democratized the photographs by making them visible from both from the public street and inside the building. The Toiletpaper windows were commissioned by Swiss-American artist Christian Marclay as part of a series of ongoing “interventions on the building”, which included installations in staircases, and on signage and walls.

To celebrate the magazine’s purported “millionth-copy-sold” milestone, Cattelan and Ferrari opened a temporary Toiletpaper store in Milan. The pop-up shop was a collaboration with Italian furniture brand Gufram and luxury homeware designer Seletti. The space was a fully immersive version of the magazine, with point of sale displays covered in imagery that channelled the magazine’s postmodernist aesthetic. Items for sale included home decor, dinnerware, and furniture. The duo also collaborated with The Vinyl Factory to release a special edition gold vinyl disc of Daft Punk’s 1995 Da Funk, which was available in the store ahead of its global release.

Cattelan and Ferrari partnered with Visionaire founders Cecilia Dean and James Kaliardos to create an immersive installation at The Gallery at Cadillac House in SoHo. Interspersed throughout the space were vignettes of mid-century modern furniture and accessories branded by reviewers as “Mad Men on acid”. Featuring a furnished bedroom and kitchen, visitors were encouraged to play, lounge, and take Instagram selfies in the spaces.

Cattelan and Ferrari collaborated with Wieden+Kennedy on OK Cupid’s “Dating deserves better” campaign. Reappropriating DTF, the ubiquitous contemporary dating term referring to a person who is willing to have sex, the campaign reinterprets the letter F into phrases such as “down to feel fabulous”, “down to forget our baggage”, and “down to fight about the president”.

Melissa Hobley, OKCupid’s CMO, explains that partnering with Cattelan and Ferrari made sense because “their vibrant, cheeky images were the right fit” for the humorous campaign. “In the current political and social climate, we felt a responsibility and saw an opportunity to play a part in changing the conversation about dating culture and empowering each individual to reclaim the meaning of DTF and make it theirs.”

This exhibition focused on assemblages inspired by found images taken from both the Internet and magazines. Using gilded mirrors as a common framing thread, and referencing works by René Magritte and Georges de la Tour, the pop images combined references to art history and contemporary consumer culture.